We recently had the chance to help out a friend who purchased a new 5th wheel RV.  It is one of the higher end units that is touted as a full time living RV.  That is what my friend was looking for as they are full time RVers who are now on their third RV.

They purchased the RV from an RV dealership and trusted that they would check it out thoroughly for manufacturer defects before they took possession of it and hit the road.  We met our new friends a few days later when they stayed at an RV park that we were at.

You see, they were there for a 5-day RV Tech Course that we were teaching a business session for.  They attended the five-day class and decided to stay for the next week’s class which focused on RV inspections.  During the process of learning about the RV inspection process and all the steps that an inspection requires, while on the roof of their new RV, some issues started to be discovered.  One thing that was immediately apparent was the rear ladder was bent, so much so that use of it would not be recommended.

You say, how can someone not notice a bent ladder when picking up their new RV home?  It happens in all the excitement of getting a new RV.  Things are missed!  You see, people fall in love with all the interior niceties and miss the important stuff. 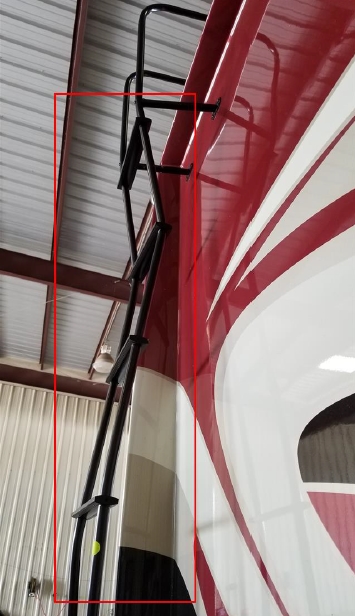 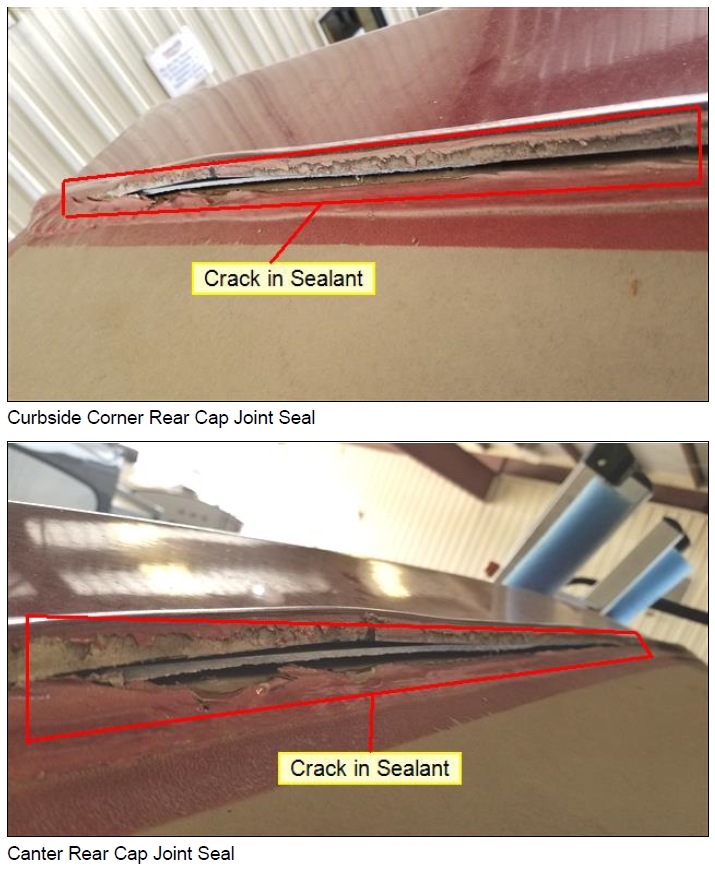 Upon further evaluation from the roof, it was observed that some of the other sealant joints around the vents and antenna had already cracked.  Also, the rubber seals that seal the slideout to the sidewalls were either torn away or slightly separated.  These issues will lead to further water intrusion into the RV as time progresses.  Eventually, that will lead to structural degradation and the possibility of mold development. 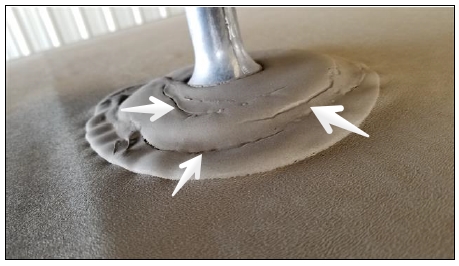 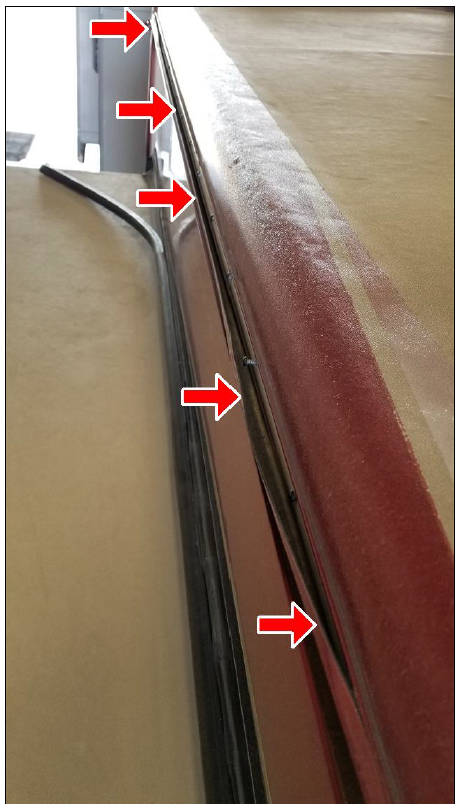 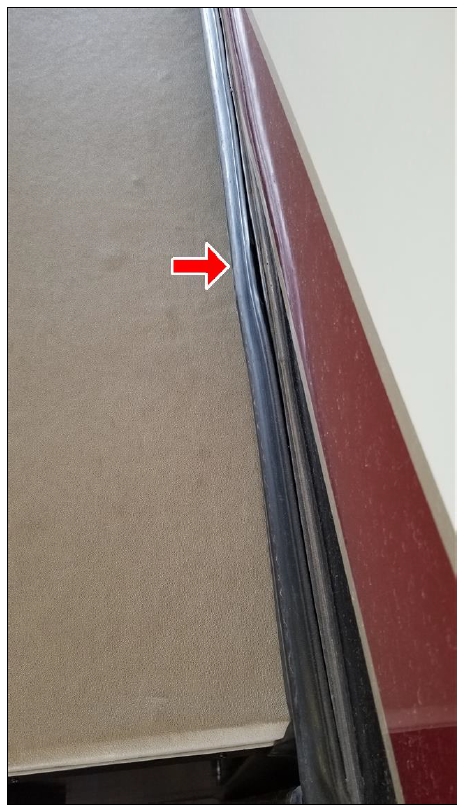 A few days after witnessing these issues our friends left the RV park.  They said that they would take the RV back to the dealership for the needed repairs.  Now realize, when you are living in your RV full time, that means you have to leave your RV home unless the RV dealership makes arrangements for you to keep living in it while they work on it.  Not many will do that due to liability issues.

The Rest of the Story!

On the way to their next destination, our friends had a sudden and unexpected issue that could have been catastrophic!  They were traveling down a major highway and the curbside rear axle broke loose from the leaf spring assembly and wedged itself against the rear curbside leveling jack.  Fortunately, a passer-by on the highway flagged our friends and notified them just after the occurrence.

They were quickly able to get the RV off the highway and assess the damage.  The RV was not going to be able to be moved, as it was, and my friends search for assistance was not being welcomed with a quick response.  So, they had to limp off the busy highway to a side road, park there, and figure out a way to get the RV to a dealership.

They were able to strap the rear axle to the front axle and pull it back inline with the aid of a heavy duty ratchet strap.  Once that was done, with a police escort, my friends were able to make it to a hotel.  At that point, they were not interested in spending the night in their new RV. 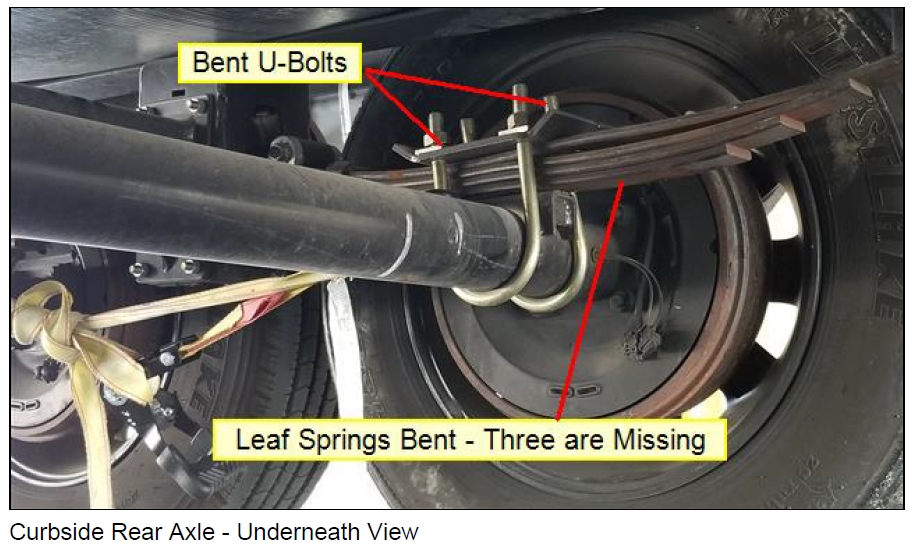 The next day they were able to get the RV back to the RV dealership.  They needed to return to one that was related to the dealership they purchased from, and fortunately, there was one close by.

It was at this point that our new friends reached out to us to see if we could help them out with their situation.  They felt that given all the RV’s issues that they learned about in class, and with what had just happened, they needed a full assessment of the RV’s current condition.

So, knowing what they learned from their two weeks with us they decided that a full RV inspection by an NRVIA certified RV inspector was the only way to document all the current issues with the RV.

So, once we worked out all the details with the owner and the RV dealership, we set a date to inspect the RV.  It was located in the dealership’s RV delivery bay and plugged into shore power.  We also wanted water and sewer service so we could test all systems, but that was not provided.  The manufacturer of the RV was also involved with this situation.  They wanted a copy of the RV inspection report, once completed, to decide what the next steps would be: fix the RV or replace it.

We started our RV inspection at 9 AM.  The normal process is to start on the roof.  Once I set the ladder against the rear of the RV I met with resistance.  I carry a $1.1 million dollar liability policy for which I was willing to share a copy with the dealership.  I was told I could not get on the roof even though that is where I needed to go to document the roof issues.

I proceeded anyway as the RV dealership owner was not able to be reached.  By the time I was off the roof, had investigated all the sidewalls and was evaluating the slideouts, I was told that I could not use my ladder to evaluate anything else.

I agreed to do that.  A short while later I was approached by the general manager of the dealership and asked to leave the premises!

He stated that if he had known what we were going to do he would not have allowed us on the property.  Huh?  What were they afraid of?  Any issues that were found with the RV would be covered by the manufacturer’s warranty and the RV dealership would be paid for the repairs.  Is that not repair revenue for them?

Or, is it that they were embarrassed by the lack of quality of the RV and were trying to cover up the issues and keep them within the confines of those in the employ of the RV dealership?  The only thing they were neglecting to consider is that the RV owner is willing to go to local media sources and pursue legal avenues to get what he wants.

What is the Situation Right Now?

At this point, the RV is sitting at the dealership and it is not being fixed.  The owners are in a hotel waiting for their RV home to be repaired so they can continue with their lives.

If they had gotten an RV inspection prior to signing the paperwork and picking up the RV, perhaps a lot of these issues would have been avoided.  But, at that time they did not know that such a service existed.

An RV inspector’s goal is not to condemn anyone.  Our desire is to assist those in the RV industry to be sure that once an RV is sold by a previous owner or RV dealership, that it is functional and safe for travel so that the new owner can create lasting memories while enjoying safe travels with friends and family!

If you would like to know more about this service please contact howard@nrvia.org.  You may also use the contact form that pops up in the lower right corner to reach out to me.

UPDATE:  After two months at the dealership, and my friend patiently waiting to get the RV back with all the needed repairs made, the RV was returned to him and his wife.  Along with their fur-kids, they needed to head to California.  Unfortunately, the repairs were not performed to his satisfaction leaving him to have to deal with the issues at a later date.